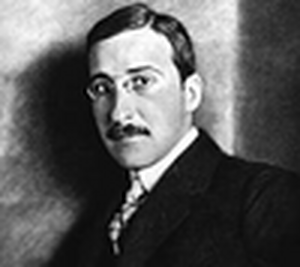 Stefan Zweig (; German: [ˈʃtɛ.fan t͡svaɪ̯k] (listen); 28 November 1881 – 22 February 1942) was an Austrian novelist, playwright, journalist and biographer. At the height of his literary career, in the 1920s and 1930s, he was one of the most widely translated and most popular writers in the world.

Zweig was raised in Vienna, Austria-Hungary. He wrote historical studies of famous literary figures, such as Honoré de Balzac, Charles Dickens, and Fyodor Dostoevsky in Drei Meister (1920; Three Masters), and decisive historical events in Sternstunden der Menschheit (1928; published in English in 1940 as The Tide of Fortune: Twelve Historical Miniatures). He wrote biographies of Joseph Fouché (1929), Mary Stuart (1935) and Marie Antoinette (Marie Antoinette: The Portrait of an Average Woman, 1932), among others. Zweig's best-known fiction includes Letter from an Unknown Woman (1922), Amok (1922), Fear (1925), Confusion of Feelings (1927), Twenty-Four Hours in the Life of a Woman (1927), the psychological novel Ungeduld des Herzens (Beware of Pity, 1939), and The Royal Game (1941).

In 1934, as a result of the Nazi Party's rise in Germany, Zweig emigrated to England and then, in 1940, moved briefly to New York and then to Brazil, where he settled. In his final years, he would declare himself in love with the country, writing about it in the book Brazil, Land of the Future. Nonetheless, as the years passed Zweig became increasingly disillusioned and despairing at the future of Europe, and he and his wife Lotte were found dead of a barbiturate overdose in their house in Petrópolis on 23 February 1942; they had died the previous day. His work has been the basis for several film adaptations. Zweig's memoir, Die Welt von Gestern (The World of Yesterday, 1942), is noted for its description of life during the waning years of the Austro-Hungarian Empire under Franz Joseph I and has been called the most famous book on the Habsburg Empire.