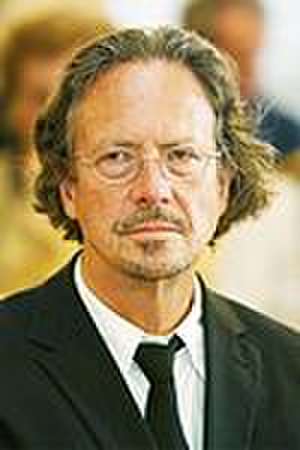 Peter Handke (German pronunciation: [ˈpeːtɐ ˈhantkə]; born 6 December 1942) is a novelist, playwright, translator, poet, film director, and screenwriter from Austria. He was awarded the Nobel Prize in Literature in 2019 "for an influential work that with linguistic ingenuity has explored the periphery and the specificity of human experience." Though some praised Handke as a meritorious laureate, the decision to award him a Nobel Prize was denounced internationally by a variety of public and academic intellectuals, writers, and journalists, who cited his support of the late Slobodan Milošević and Bosnian genocide denial.

In the late 1960s, he was recognized for the plays Publikumsbeschimpfung (Offending the Audience) and Kaspar, as well as the novel Die Angst des Tormanns beim Elfmeter (The Goalie's Anxiety at the Penalty Kick). Prompted by his mother's suicide in 1971, he reflected her life in the novel Wunschloses Unglück (A Sorrow Beyond Dreams). Handke was a member of the Grazer Gruppe (an association of authors) and the Grazer Autorenversammlung, and co-founded the Verlag der Autoren publishing house in Frankfurt. He collaborated with director Wim Wenders, leading to screenplays such as The Wrong Move and Der Himmel über Berlin (Wings of Desire).