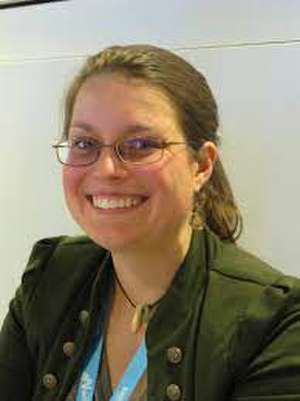 Becky Chambers was raised in California as the progeny of an astrobiology educator, an aerospace engineer, and an Apollo-era rocket scientist. An inevitable space enthusiast, she made the obvious choice of studying performing arts. After a few years in theater administration, she shifted her focus toward writing. Her creative work has appeared at The Mary Sue, Tor.com, Five Out Of Ten, The Toast, and Pornokitsch. The Long Way to a Small, Angry Planet is her first novel, and was funded in 2012 thanks to a successful Kickstarter campaign.

After living in Scotland and Iceland, Becky is now back