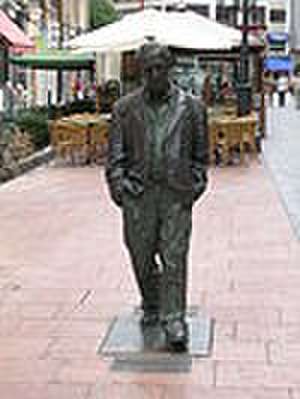 Woody Allen (born Allan Stewart Konigsberg; December 1, 1935) is an American film director, writer, actor, and comedian whose career spans more than six decades and multiple Academy Award-winning films. He began his career as a comedy writer on Sid Caesar's comedy variety program Your Show of Shows, working alongside Mel Brooks, Carl Reiner, Larry Gelbart and Neil Simon. He also began writing material for television, published several books featuring short stories, and writing humor pieces for The New Yorker. In the early 1960s, he performed as a stand-up comedian in Greenwich Village alongside Lenny Bruce, Elaine May, Mike Nichols, and Joan Rivers. There he developed a monologue style (rather than traditional jokes), and the persona of an insecure, intellectual, fretful nebbish. He released three comedy albums during the mid to late 1960s, earning a Grammy Award nomination for his 1964 comedy album entitled simply, Woody Allen. In 2004 Comedy Central ranked Allen fourth on a list of the 100 greatest stand-up comedians, while a UK survey ranked Allen the third-greatest comedian.

By the mid-1960s Allen was writing and directing films, first specializing in slapstick comedies such as Take the Money and Run (1969), Bananas (1971), Sleeper (1973), and Love and Death (1975), before moving into dramatic material influenced by European art cinema during the late 1970s with Interiors (1978), Manhattan (1979) and Stardust Memories (1980), and alternating between comedies and dramas to the present. Allen is often identified as part of the New Hollywood wave of filmmakers of the mid-1960s to late 1970s such as Martin Scorsese, Robert Altman, and Sidney Lumet. He often stars in his films, typically in the persona he developed as a standup. His film Annie Hall (1977), a romantic comedy featuring Allen and his frequent collaborator Diane Keaton, won four Academy Awards, including Best Picture, Best Director, Best Original Screenplay, and Best Actress for Keaton. Critics have called his work from the 1980s his most developed period. His films include Zelig (1983), Broadway Danny Rose (1984), The Purple Rose of Cairo (1985), Hannah and Her Sisters (1986), Radio Days (1987), Another Woman (1988), and Crimes and Misdemeanors (1989). In the 21st century many of Allen's films have been set and shot in Europe, including Match Point (2005), Vicky Cristina Barcelona (2008), and Midnight in Paris (2011). Allen returned to America gaining acclaim for Blue Jasmine (2013) and Cafe Society (2016).

In 1979, Allen began a professional and personal relationship with actress Mia Farrow, and over a decade-long period they collaborated on 13 films. They separated after Allen began a relationship with Mia's and Andre Previn's adopted daughter Soon-Yi Previn. During the separation, Allen was publicly accused of sexually abusing his daughter, the seven-year-old Dylan. The allegation gained substantive media attention, but Allen was never charged or prosecuted, and vehemently denied the allegation. Allen married Soon-Yi in 1997, and they adopted two children.

Critic Roger Ebert described Allen as "a treasure of the cinema". Allen has received many accolades and honors. He has received the most nominations for the Academy Award for Best Original Screenplay, with 16. He has won four Academy Awards, one for Best Director, and three for Best Original Screenplay. He also garnered nine British Academy Film Awards. In 1997, Allen was awarded the BAFTA Fellowship by the British Academy of Film and Television Arts. In 2014 he received the Golden Globe Cecil B. DeMille Award for Lifetime Achievement and a Tony Award nomination for Best Book of a Musical for Bullets over Broadway. The Writers Guild of America named his screenplay for Annie Hall first on its list of the "101 Funniest Screenplays". In 2011 PBS televised the film biography Woody Allen: A Documentary on its series American Masters.