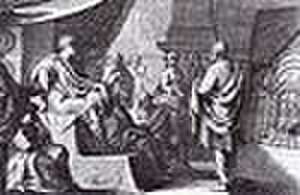 Vitruvius (; c. 80–70 BC – after c. 15 BC) was a Roman architect and engineer during the 1st century BC, known for his multi-volume work entitled De architectura. He originated the idea that all buildings should have three attributes: firmitas, utilitas, and venustas ("strength", "utility", and "beauty"). These principles were later widely adopted in Roman architecture. His discussion of perfect proportion in architecture and the human body led to the famous Renaissance drawing of the Vitruvian Man by Leonardo da Vinci.

Little is known about Vitruvius' life, but by his own description he served as an artilleryman, the third class of arms in the Roman military offices. He probably served as a senior officer of artillery in charge of doctores ballistarum (artillery experts) and libratores who actually operated the machines. As an army engineer he specialized in the construction of ballista and scorpio artillery war machines for sieges. It is possible that Vitruvius served with Julius Caesar's chief engineer Lucius Cornelius Balbus.

Vitruvius' De architectura was widely copied and survives in many dozens of manuscripts throughout the Middle Ages, though in 1414 it was "rediscovered" by the Florentine humanist Poggio Bracciolini in the library of Saint Gall Abbey. Leon Battista Alberti published it in his seminal treatise on architecture, De re aedificatoria (c. 1450). The first known Latin printed edition was by Fra Giovanni Sulpitius in Rome in 1486. Translations followed in Italian, French, English, German, Spanish, and several other languages. Though the original illustrations have been lost, the first illustrated edition was published in Venice in 1511 by Fra Giovanni Giocondo, with woodcut illustrations based on descriptions in the text.