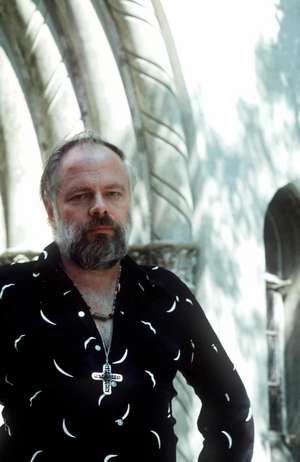 Philip Kindred Dick (December 16, 1928 – March 2, 1982) was an American writer known for his work in science fiction. A master of dystopian fiction, he wrote 44 published novels and approximately 121 short stories, most of which appeared in science fiction magazines during his lifetime. His fiction explored varied philosophical and social themes, and featured recurrent elements such as alternate realities, simulacra, monopolistic corporations, drug abuse, authoritarian governments, and altered states of consciousness. His work was concerned with questions surrounding the nature of reality, perception, human nature, and identity.

Born in Chicago, Dick moved to the San Francisco Bay Area with his family at a young age. He began publishing science fiction stories in 1952 (age 23). His stories initially found little commercial success, but his alternative history novel The Man in the High Castle (1962) earned Dick early acclaim, including a Hugo Award for Best Novel, when he was just 33 years old.

Dick followed with science fiction novels such as Do Androids Dream of Electric Sheep? (1968) and Ubik (1969). His 1974 novel Flow My Tears, the Policeman Said won the John W. Campbell Memorial Award for Best Science Fiction Novel. Following a series of religious experiences in 1974, Dick's work engaged more explicitly with issues of theology, philosophy, and the nature of reality, as in novels A Scanner Darkly (1977) and VALIS (1981). A collection of his nonfiction writing on these themes was published posthumously as The Exegesis of Philip K. Dick (2011). He died in 1982 in Santa Ana, California, at the age of 53, due to complications from a stroke.

Dick's posthumous influence has been widespread, extending beyond literary circles into Hollywood filmmaking. Popular films based on Dick's works include Blade Runner (1982), Total Recall (adapted twice: in 1990 and in 2012), Minority Report (2002), A Scanner Darkly (2006), and The Adjustment Bureau (2011). Beginning in 2015, Amazon produced the multi-season television adaptation The Man in the High Castle based on Dick's 1962 novel, and in 2017 Channel 4 began producing the ongoing anthology series Electric Dreams based on various Dick stories. In 2005, Time magazine named Ubik (1969) one of the hundred greatest English-language novels published since 1923. In 2007, Dick became the first science fiction writer ever to be included in The Library of America series.