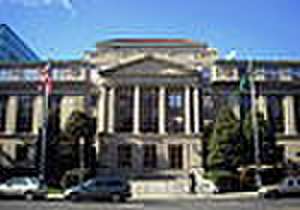 The National Geographic Society (NGS), headquartered in Washington, D.C., United States, is one of the largest non-profit scientific and educational organizations in the world. Founded in 1888, its interests include geography, archaeology, and natural science, the promotion of environmental and historical conservation, and the study of world culture and history. The National Geographic Society's logo is a yellow portrait frame—rectangular in shape—which appears on the margins surrounding the front covers of its magazines and as its television channel logo. Through National Geographic Partners (a joint venture with The Walt Disney Company), the Society operates the magazine, TV channels, a website, worldwide events, and other media operations.