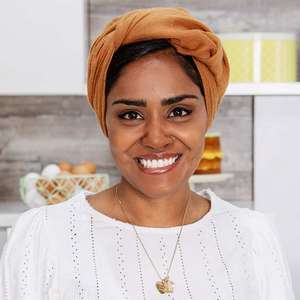 Nadiya Jamir Hussain (née Begum; born 25 December 1984) is a British-Bangladeshi TV chef, author and television presenter. She rose to fame after winning the sixth series of BBC's The Great British Bake Off in 2015. Since winning, she has signed contracts with the BBC to host the documentary The Chronicles of Nadiya and TV cookery series Nadiya's British Food Adventure and Nadiya's Family Favourites; co-presented The Big Family Cooking Showdown; and has become a regular contributor on The One Show.

Hussain is a columnist for The Times Magazine and has signed publishing deals with Penguin Random House, Hodder Children's Books and Harlequin. She has appeared as a guest panellist on ITV's Loose Women. She was invited to bake a cake for the 90th birthday celebrations of Elizabeth II.

In 2017, Hussain was named by Debrett's as one of the 500 most influential people in the UK and was on BBC News' 100 Women list. She was also shortlisted for Children's Book of the Year prize at the British Book Awards for Bake Me A Story and was nominated for Breakthrough Star at the Royal Television Society Awards for The Chronicles of Nadiya. Ted Cantle, the author of a government report on community cohesion, said Hussain had done "more for British-Muslim relations than 10 years of government policy".