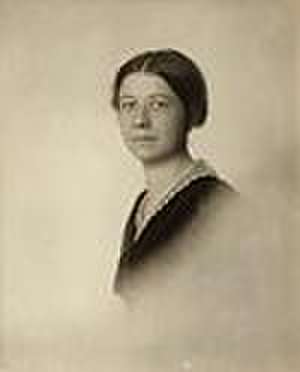 Mary Ritter Beard (August 5, 1876 – August 14, 1958) was an American historian, author, women's suffrage activist, and women's history archivist who was also a lifelong advocate of social justice. As a Progressive Era reformer, Beard was active in both the labor and women's rights movements. She also authored several books on women's role in history including On Understanding Women (1931), America Through Women's Eyes (editor, 1933), and Woman as Force in History: A Study in Traditions and Realities (1946), her major work. In addition, she collaborated with her husband, historian Charles Austin Beard, as coauthor of seven textbooks, most notably The Rise of American Civilization (1927), two volumes, and America in Midpassage: A Study of the Idea of Civilization (1939) and The American Spirit (1942), the third and fourth volume of The Rise of American Civilization series. A standalone book, Basic History of the United States, was their best-selling work.

During the early decades of the twentieth century, Beard actively supported passage of the Nineteenth Amendment and was involved with several women's suffrage organizations that included the Women's Trade Union League, the Equality League of Self-Supporting Women (later renamed the Women's Political Union), the New York City Suffrage Party, and the Wage-Earners' Suffrage League. She was also a member of the advisory board of the Congressional Union for Woman Suffrage (later called the National Woman's Party. For a time, she edited suffrage publications, The Woman Voter and The Suffragist.

Beard's interest in women's history led to her work in establishing the World Center for Women's Archives in 1935 in New York City. Although the center closed in 1940, largely due to internal issues and lack of funding, her efforts encouraged several colleges and universities to begin collecting similar records on women's history. Beard was a consultant on the early development of women's history archives at Radcliffe and Smith Colleges, which eventually led to establishment of the Arthur and Elizabeth Schlesinger Library on the History of Women in America at Radcliffe Institute for Advanced Study, Harvard University, and the Sophia Smith Collection at Smith College.