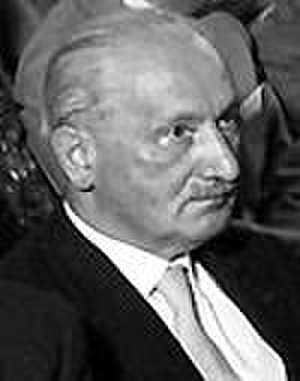 Martin Heidegger (; German: [ˈmaʁtiːn ˈhaɪdɛɡɐ]; 26 September 1889 – 26 May 1976) was a German philosopher who is widely regarded as one of the most important philosophers of the 20th century. He is best known for contributions to phenomenology, hermeneutics, and existentialism.

In Being and Time (1927), Heidegger addresses the meaning of "being" by considering the question, "what is common to all entities that makes them entities?" Heidegger approaches this question through an analysis of Dasein, his term for the specific type of being that humans possess, and which he associates closely with his concept of "being-in-the-world" (In-der-Welt-sein). This conception of the human is in contrast with that of Rationalist thinkers like René Descartes, who had understood human existence most basically as thinking, as in Cogito ergo sum ("I think therefore I am").

Heidegger's later work includes criticism of the view, common in the Western tradition, that all of nature is a "standing reserve" on call, as if it were a part of industrial inventory.

Heidegger was a member and supporter of the Nazi Party. There is controversy as to the relationship between his philosophy and his Nazism.