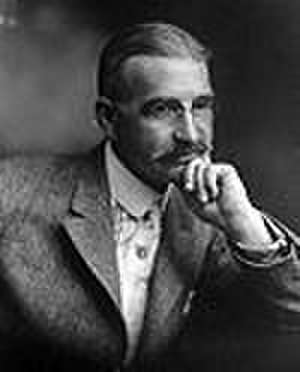 Lyman Frank Baum (; May 15, 1856 – May 6, 1919) was an American author known for his children's books, particularly The Wonderful Wizard of Oz and its sequels. He wrote 14 novels in the Oz series, plus 41 other novels (not including four lost, unpublished novels), 83 short stories, over 200 poems, and at least 42 scripts. He made numerous attempts to bring his works to the stage and screen; the 1939 adaptation of the first Oz book became a landmark of 20th-century cinema.

Born and raised in upstate New York, Baum moved west after an unsuccessful stint as a theater producer and playwright. He and his wife opened a store in South Dakota and he edited and published a newspaper. They then moved to Chicago, where he worked as a newspaper reporter and published children's literature, coming out with the first Oz book in 1900. While continuing his writing, among his final projects he sought to establish a movie studio focused on children's films in Los Angeles, California.

His works anticipated such later commonplaces as television, augmented reality, laptop computers (The Master Key), wireless telephones (Tik-Tok of Oz), women in high-risk and action-heavy occupations (Mary Louise in the Country), and the ubiquity of clothes advertising (Aunt Jane's Nieces at Work).