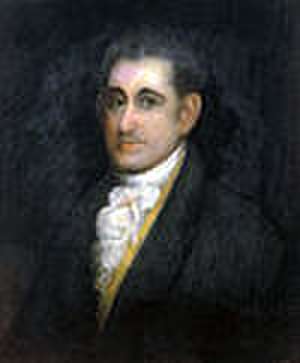 John Adair (January 9, 1757 – May 19, 1840) was an American pioneer, slave trader, soldier, and politician. He was the eighth Governor of Kentucky and represented the state in both the U.S. House and Senate. A native of South Carolina, Adair enlisted in the state militia and served in the Revolutionary War, during which he was twice captured and held as a prisoner of war by the British. Following the War, he was elected as a delegate to South Carolina's convention to ratify the United States Constitution.

After moving to Kentucky in 1786, Adair participated in the Northwest Indian War, including a skirmish with the Miami Chief Little Turtle near Fort St. Clair in 1792. Popular for his service in two wars, he entered politics in 1792 as a delegate to Kentucky's constitutional convention. Adair was elected to a total of eight terms in the state House of Representatives between 1793 and 1803. He served as Speaker of the Kentucky House in 1802 and 1803, and was a delegate to the state's Second Constitutional Convention in 1799. He ascended to the United States Senate to fill the seat vacated when John Breckinridge resigned to become Attorney General of the United States in the Cabinet of Thomas Jefferson, but failed to win a full term in the subsequent election due to his implication in a treason conspiracy involving Vice President Aaron Burr. After a long legal battle, he was acquitted of any wrongdoing; and his accuser, General James Wilkinson, was ordered to issue an apology. The negative publicity kept him out of politics for more than a decade.

Adair's participation in the War of 1812, and a subsequent protracted defense of Kentucky's soldiers against General Andrew Jackson's charges that they showed cowardice at the Battle of New Orleans, restored his reputation. He returned to the State House in 1817, and Isaac Shelby, his commanding officer in the War who was serving a second term as governor, appointed him adjutant general of the state militia. In 1820, Adair was elected eighth governor on a platform of financial relief for Kentuckians hit hard by the Panic of 1819, and the ensuing economic recession. His primary effort toward this end was the creation of the Bank of the Commonwealth, but many of his other financial reforms were deemed unconstitutional by the Kentucky Court of Appeals, touching off the Old Court–New Court controversy. Following his term as governor, Adair served one undistinguished term in the United States House of Representatives and did not run for re-election.