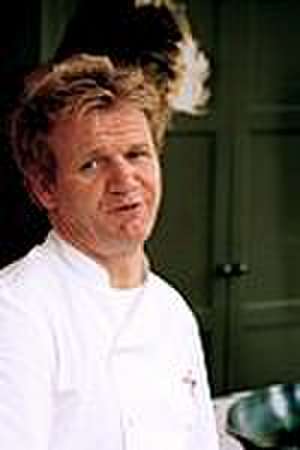 Gordon James Ramsay (; born 8 November 1966) is a British chef, restaurateur, television personality and writer. He was born in Johnstone, Scotland, and raised in Stratford-upon-Avon, England. Ramsay founded his global restaurant group, Gordon Ramsay Restaurants, in 1997. It has been awarded 16 Michelin stars in total and currently holds a total of seven. After rising to fame on the British television miniseries Boiling Point in 1999, Ramsay had become one of the best-known and most influential chefs in the UK by 2004.

As a reality television personality, Ramsay is known for his bluntness, as well as fiery temper, strict demeanour, and frequent use of profanity. He combines activities in the television, film, hospitality, and food industries and has promoted and hired various chefs who have apprenticed under his wing. Ramsay is known for presenting TV programmes about competitive cookery and food, such as the British series Hell's Kitchen (2004), Ramsay's Kitchen Nightmares (2004–2009) and The F Word (2005–2010), the latter winning the BAFTA for Best Feature at the 2005 British Academy Television Awards, and the American versions of Hell's Kitchen (2005–present), Kitchen Nightmares (2007–2014), MasterChef (2010–present), MasterChef Junior (2013–present), as well as Hotel Hell (2012–2016), Gordon Behind Bars (2012), and 24 Hours to Hell and Back (2018–present).

Ramsay was appointed Officer of the Order of the British Empire (OBE) by Queen Elizabeth II in the 2006 New Year Honours list for services to the hospitality industry. In July 2006, he won the Catey award for "Independent Restaurateur of the Year", becoming only the third person to have won three Catey awards. In 2020, Forbes listed his earnings at $70 million for the previous 12 months, and ranked him the 19th-highest-earning celebrity in the world.