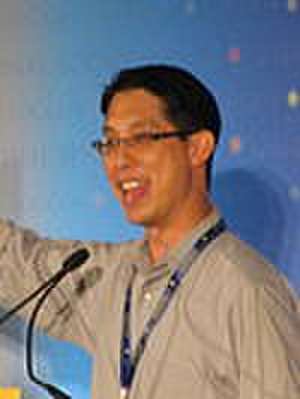 Gene Luen Yang (Chinese Traditional: 楊謹倫, Simplified: 杨谨伦, Pinyin: Yáng Jǐnlún; born August 9, 1973) is an American cartoonist. He is a frequent lecturer on the subjects of graphic novels and comics, at comic book conventions and universities, schools, and libraries. In addition, he was the Director of Information Services and taught computer science at Bishop O'Dowd High School in Oakland, California. In 2012, Yang joined the faculty at Hamline University, as a part of the Low-Residency Master of Fine Arts in Writing for Children and Young Adults (MFAC) program. In 2016, the U.S. Library of Congress named him Ambassador for Young People's Literature. That year he became the third graphic novelist, alongside Lauren Redniss, to receive the MacArthur Fellowship.