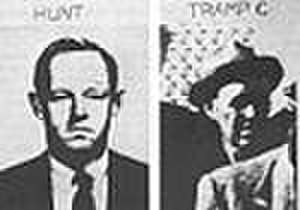 Everette Howard Hunt Jr. (October 9, 1918 – January 23, 2007) was an American intelligence officer and author. From 1949 to 1970, Hunt served as an officer in the Central Intelligence Agency (CIA), particularly in the United States involvement in regime change in Latin America including the 1954 Guatemalan coup d'état and the 1961 Bay of Pigs invasion. Along with G. Gordon Liddy, Frank Sturgis, and others, Hunt was one of the Nixon administration "plumbers", a team of operatives charged with identifying government sources of national security information "leaks" to outside parties. Hunt and Liddy plotted the Watergate burglaries and other clandestine operations for the Nixon administration. In the ensuing Watergate scandal, Hunt was convicted of burglary, conspiracy, and wiretapping, eventually serving 33 months in prison. After release, Hunt lived in Mexico and then Florida until his death.