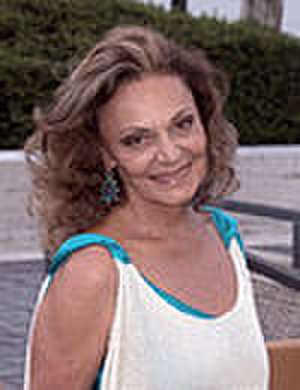 Diane von Fürstenberg (born Diane Simone Michele Halfin; 31 December 1946) is a Belgian fashion designer best known for her wrap dress. She initially rose to prominence in 1969 when she married into the princely German House of Fürstenberg, as the wife of Prince Egon von Fürstenberg. Following their separation in 1972 and divorce in 1983, she has continued to use his family name.

Her fashion company, Diane von Furstenberg (DvF), is available in over 70 countries and 45 free-standing shops worldwide, with the company's headquarters and flagship boutique located in Manhattan's Meatpacking District.

She is the past chairwoman of the Council of Fashion Designers of America (CFDA), a position she held from 2006 to 2019 ; in 2014 was listed as the 68th most powerful woman in the world by Forbes; and in 2015 was included in the Time 100, as an Icon, by Time Magazine. In 2016, she was awarded an honorary doctorate from The New School. In 2019, she was inducted into the National Women's Hall of Fame.