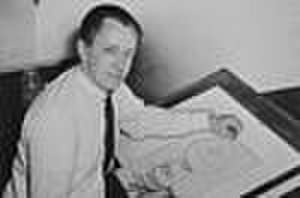 Charles Monroe "Sparky" Schulz (; November 26, 1922 – February 12, 2000) was an American cartoonist and creator of the comic strip Peanuts (which featured the characters Charlie Brown and Snoopy, among others). He is widely regarded as one of the most influential cartoonists in United States, cited by cartoonists including Jim Davis, Bill Watterson, Matt Groening, and Dav Pilkey.