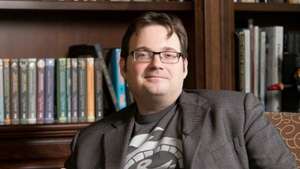 Brandon Sanderson (born December 19, 1975) is an American fantasy and science fiction writer. He is best known for the Cosmere universe, in which most of his fantasy novels (most notably the Mistborn series and The Stormlight Archive) are set. He is also known for finishing Robert Jordan's high fantasy series The Wheel of Time.