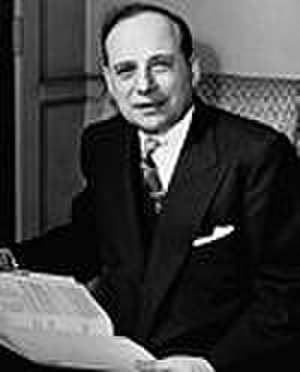 Benjamin Graham (; né Grossbaum; May 9, 1894 – September 21, 1976) was a British-born American economist, professor and investor. He is widely known as the "father of value investing", and wrote two of the founding texts in neoclassical investing: Security Analysis (1934) with David Dodd, and The Intelligent Investor (1949). His investment philosophy stressed investor psychology, minimal debt, buy-and-hold investing, fundamental analysis, concentrated diversification, buying within the margin of safety, activist investing, and contrarian mindsets.

After graduating from Columbia University at age 20, he started his career on Wall Street, eventually founding the Graham-Newman Partnership. After employing his former student Warren Buffett, he took up teaching positions at his alma mater, and later at UCLA Anderson School of Management at the University of California, Los Angeles.

His work in managerial economics and investing has led to a modern wave of value investing within mutual funds, hedge funds, diversified holding companies, and other investment vehicles. Throughout his career, Graham had many notable disciples who went on to receive substantial success in the world of investment, including Irving Kahn and Warren Buffett, the latter going on to describe him as the second most influential person in his life after his own father. Another one of Graham's famous students was Sir John Templeton.