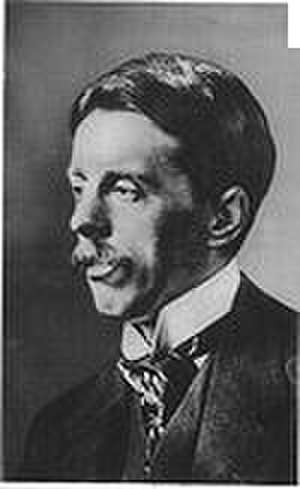 Enoch Arnold Bennett (27 May 1867 – 27 March 1931) was an English author, best known as a novelist. He was a prolific writer: between the start of his career in 1898 and his death he completed 34 novels, seven volumes of short stories, 13 plays (some in collaboration with other writers), and a daily journal totalling more than a million words. He wrote articles and stories for more than 100 different newspapers and periodicals, worked in and briefly ran the Ministry of Information in the First World War, and wrote for the cinema in the 1920s. The sales of his books were substantial, and he was the most financially successful British author of his day.

Born into a modest but upwardly-mobile family in Hanley, in the Staffordshire Potteries, Bennett was intended by his father, a solicitor, to follow him into the legal profession. Bennett worked for his father, before moving to another law firm in London as a clerk, aged 21. He became assistant editor and then editor of a women's magazine, before becoming a full-time author in 1900. Always a devotee of French culture in general and French literature in particular, he moved to Paris in 1902, where the relaxed milieu helped him overcome his intense shyness, particularly with women. He spent ten years in France, marrying a Frenchwoman in 1907. In 1912 he moved back to England. He and his wife separated in 1921 and he spent the last years of his life with a new partner, an English actress. He died in 1931 of typhoid fever, having unwisely drunk tap water in France.

Bennett is best known for his novels and short stories, many of which are set in a fictionalised version of the Potteries, which he called The Five Towns. He strongly believed that literature should be accessible to ordinary people, and he deplored literary cliques and élites. His books appealed to a wide public and sold in large numbers. For this reason writers and supporters of the modernist school, notably Virginia Woolf, belittled him, and his work became neglected after his death. Bennett was also a playwright; he did less well in the theatre than with novels, but achieved two considerable successes with Milestones (1912) and The Great Adventure (1913). He also had considerable success with journalistic 'self-help' books such as How to Live on 24 Hours a Day (1908) and Literary Taste: How to Form It (1909).