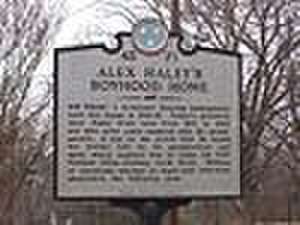 Alexander Murray Palmer Haley (August 11, 1921 – February 10, 1992) was an American writer and the author of the 1976 book Roots: The Saga of an American Family. ABC adapted the book as a television miniseries of the same name and aired it in 1977 to a record-breaking audience of 130 million viewers. In the United States, the book and miniseries raised the public awareness of black American history and inspired a broad interest in genealogy and family history.

Haley's first book was The Autobiography of Malcolm X, published in 1965, a collaboration through numerous lengthy interviews with Malcolm X.

He was working on a second family history novel at his death. Haley had requested that David Stevens, a screenwriter, complete it; the book was published as Queen: The Story of an American Family. It was adapted as a miniseries, Alex Haley's Queen, broadcast in 1993.