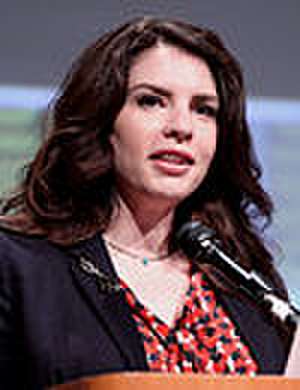 Stephenie Meyer (; née Morgan; born December 24, 1973) is an American novelist. She is best known for writing the vampire romance series Twilight, which has sold over 100 million copies, with translations into 37 different languages. Meyer was the bestselling author of 2008 and 2009 in the U.S., having sold over 29 million books in 2008, and 26.5 million in 2009. Meyer received the 2009 Children's Book of the Year award from the British Book Awards for Breaking Dawn, the Twilight series finale.

An avid young reader, she attended Brigham Young University, marrying at the age of twenty-one before graduating with a degree in English in 1997. Having no prior experience as an author, she conceived the idea for the Twilight series in a dream. Influenced by the work of Jane Austen and William Shakespeare, she wrote Twilight soon thereafter. After many rejections, Little, Brown and Company offered her a $750,000 three-book deal which led to a four-book series, several spin-off novels and novellas, and a series of commercially successful film adaptations. Aside from young adult novels, Meyer has ventured into adult novels with The Host (2008) and The Chemist (2016). Meyer has worked in film production and cofounded production company Fickle Fish Films. Meyer produced both parts of Breaking Dawn and two other novel adaptations.

Meyer's membership in The Church of Jesus Christ of Latter-day Saints (LDS Church) shaped her novels: there are no drinking, smoking, or explicit sex scenes, and the characters Edward and Bella in her Twilight series remain sexually abstinent until marriage. Themes consistent with her religion, including agency, mortality, temptation, and eternal life, are prominent in her work. Meyer's work has been criticized for her overly-simplistic writing style, and feminists assert that the novel encourages traditional gender roles and that furthermore, Bella and Edward's romance has signs of an abusive relationship. Despite this criticism, Meyer considers herself a feminist. Meyer's stories have also received praise and she has acquired a fan following.

Meyer was included on Time magazine's list of the "100 Most Influential People in 2008", and was included in the Forbes Celebrity 100 list of the world's most powerful celebrities in 2009, with her annual earnings exceeding $50 million.