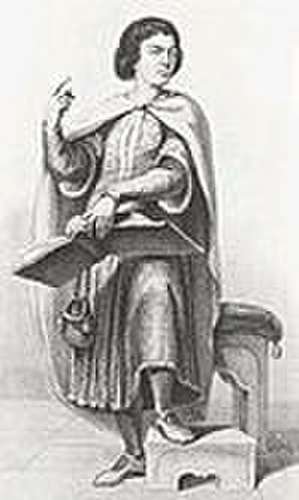 In philosophy he is celebrated for his logical solution to the problem of universals via nominalism and conceptualism and his pioneering of intent in ethics. Often referred to as the “Descartes of the twelfth century”, he is considered a forerunner of Rousseau, Kant, and Spinoza. He is sometimes credited as a chief forerunner of modern empiricism.

In history and popular culture, he is best known for his passionate and tragic love affair and intense philosophical exchange with his brilliant student and eventual wife, Héloïse d'Argenteuil. Apologist of women and of their education, Abelard founded in 1131 the first feminine monastery, meeting point of learned women, for whom he composed music. After having sent Héloïse to a convent in Brittany to protect her from her abusive uncle who did not want her to pursue this forbidden love, he was castrated by men sent by this uncle. Still considering herself as his spouse even though both retired to monasteries after this event, Heloise publicly defended him when his doctrine was condemned by Pope Innocent II and Abelard was therefore considered, at that time, as a heretic. Among these opinions, Abelard professed the innocence of a woman who commits a sin out of love.

In Catholic theology, he is best known for his development of the concept of limbo, and his introduction of the moral influence theory of atonement. He is considered (alongside Augustine) to be the most significant forerunner of the modern self-reflective autobiographer. He paved the way and set the tone for later epistolary novels and celebrity tell-alls with his publicly distributed letter, The History of My Calamities and public correspondence.

In law, Abelard stressed that, because the subjective intention determines the moral value of human action, the legal consequence of an action is related to the person that commits it and not merely to the action. With this doctrine, Abelard created in the Middle Ages the idea of the individual subject central to modern law. This eventually gave to School of Notre-Dame de Paris (later the University of Paris) a recognition for its expertise in the area of Law (and later led to the creation of a faculty of law in Paris).