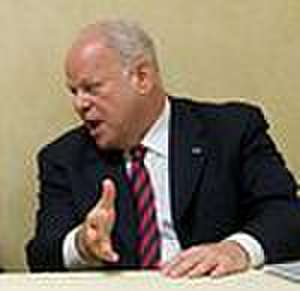 Martin Elias Pete Seligman (; born August 12, 1942) is an American psychologist, educator, and author of self-help books. Seligman is a strong promoter within the scientific community of his theories of positive psychology and of well-being. His theory of learned helplessness is popular among scientific and clinical psychologists. A Review of General Psychology survey, published in 2002, ranked Seligman as the 31st most cited psychologist of the 20th century.

Seligman is the Zellerbach Family Professor of Psychology in the University of Pennsylvania's Department of Psychology. He was previously the Director of the Clinical Training Program in the department, and earlier taught at Cornell University. He is the director of the university's Positive Psychology Center. Seligman was elected President of the American Psychological Association for 1998. He is the founding editor-in-chief of Prevention and Treatment (the APA electronic journal) and is on the board of advisers of Parents magazine.

Seligman has written about positive psychology topics in books such as The Optimistic Child, Child's Play, Learned Optimism, Authentic Happiness and Flourish. His most recent book, The Hope Circuit: A Psychologist's Journey from Helplessness to Optimism, was published in 2018.