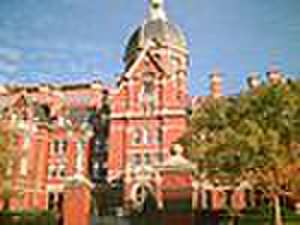 The Johns Hopkins Hospital (JHH) is the teaching hospital and biomedical research facility of the Johns Hopkins School of Medicine, located in Baltimore, Maryland, U.S. It was founded in 1889 using money from a bequest of over $7 million (1873 money, worth 134.7 million dollars in 2016) by city merchant, banker/financier, civic leader and philanthropist Johns Hopkins (1795–1873). Johns Hopkins Hospital and its school of medicine are considered to be the founding institutions of modern American medicine and the birthplace of numerous famous medical traditions including rounds, residents and house staff. Many medical specialties were formed at the hospital including neurosurgery, by Harvey Cushing and Walter Dandy; cardiac surgery by Alfred Blalock; and child psychiatry, by Leo Kanner. Attached to the hospital is the Johns Hopkins Children’s Center which serves infants, children, teens, and young adults aged 0–21.

Johns Hopkins Hospital is widely regarded as one of the world's greatest hospitals and medical institutions. It was ranked by U.S. News & World Report news magazine as the best overall hospital in America for 21 consecutive years (1991–2011). In 2019–2020, U.S. News & World Report ranked the hospital on 15 adult specialties and 10 children's specialties; the hospital came in 1st in Maryland and 3rd nationally behind the Mayo Clinic in Rochester, Minnesota and Mass General in Boston, Massachusetts. In 2021 the hospital marked 32 consecutive years of placing in the top 5 hospitals in the nation.