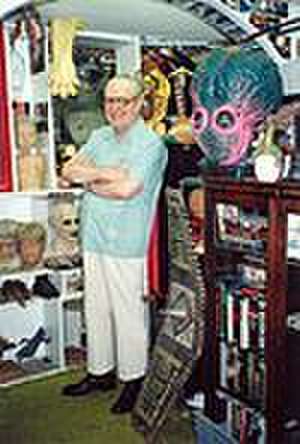 Forrest James Ackerman (November 24, 1916 – December 4, 2008) was an American magazine editor; science fiction writer and literary agent; a founder of science fiction fandom; a leading expert on science fiction, horror, and fantasy films; a prominent advocate of the Esperanto language; and one of the world's most avid collectors of genre books and film memorabilia. He was based in Los Angeles, California.

As a literary agent, he represented such science fiction authors as Ray Bradbury, Isaac Asimov, A.E. Van Vogt, Curt Siodmak, and L. Ron Hubbard. For more than 70 years he was one of science fiction's staunchest spokesmen and promoters.

He was editor and principal writer of the American magazine Famous Monsters of Filmland, as well as an actor, from the 1950s into the 21st century. He appears in several documentaries related to this period in popular culture, like Famous Monster: Forrest J Ackerman (directed by Michael R. MacDonald and written by Ian Johnston), which premiered at the Egyptian Theatre in March 2009, during the Forrest J Ackerman tribute; The Ackermonster Chronicles! (a 2012 documentary about Ackerman by writer and filmmaker Jason V Brock); and Charles Beaumont: The Short Life of Twilight Zone's Magic Man, about late author Charles Beaumont, a former client of The Ackerman Agency.

Also called "Forry", "Uncle Forry", "The Ackermonster", "Dr. Acula", "Forjak", "4e" and "4SJ", Ackerman was central to the formation, organization and spread of science fiction fandom and a key figure in the wider cultural perception of science fiction as a literary, art, and film genre. Famous for his word play and neologisms, he coined the genre nickname "sci-fi". In 1953, he was voted "#1 Fan Personality" by the members of the World Science Fiction Society, a unique Hugo Award never granted to anyone else.

He was also among the first and most outspoken advocates of Esperanto in the science fiction community.