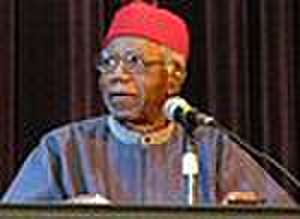 Chinua Achebe (; 16 November 1930 – 21 March 2013) was a Nigerian novelist, poet, and critic who is regarded as the most dominant figure in modern African literature. His first novel and magnum opus, Things Fall Apart (1958), occupies a pivotal place in African literature and remains the most widely studied, translated and read African novel. Along with Things Fall Apart, his No Longer at Ease (1960) and Arrow of God (1964) complete the so called "African Trilogy"; later novels include A Man of the People (1966) and Anthills of the Savannah (1987). He is often referred to as the "father of African literature", although he vigorously rejected the characterization.

Born in Ogidi, British Nigeria, Achebe's childhood straddled the worlds of Igbo traditional culture and postcolonial Christianity. He excelled in school and attended what is now the University of Ibadan, where he became fiercely critical of how European literature depicted Africa. Moving to Lagos after graduation, he worked for the Nigerian Broadcasting Service (NBS) and garnered international attention for his 1958 novel Things Fall Apart. In less than 10 years he would publish four further novels through Heinemann, with whom he began the Heinemann African Writers Series and galvanized the careers of African writers, such as Ngũgĩ wa Thiong'o and Flora Nwapa. Achebe sought to escape the colonial perspective that predominated African literature, and drew from the traditions of the Igbo people, Christian influences, and the clash of Western and African values to create a uniquely African voice. He wrote in and defended the use of English, describing it as a means to reach a broad audience, particularly readers of previously colonial nations. In 1975 he gave a controversial lecture, "An Image of Africa: Racism in Conrad's Heart of Darkness", which was a landmark in postcolonial discourse. Subsequently published in The Massachusetts Review, it featured criticism of Albert Schweitzer and particularly Joseph Conrad, who Achebe described as "a thoroughgoing racist."

When the region of Biafra broke away from Nigeria in 1967, Achebe became a supporter of Biafran independence and acted as ambassador for the people of the new nation. The subsequent Nigerian Civil War ravaged the populace, and as starvation and violence took its toll, he appealed to the people of Europe and the Americas for aid. When the Nigerian government retook the region in 1970, he involved himself in political parties but soon became disillusioned by his frustration over the continuous corruption and elitism he witnessed. He lived in the United States for several years in the 1970s, and returned to the U.S. in 1990, after a car crash left him partially disabled. Upon Achebe's return to the United States in 1990, he began a nineteen-year tenure at Bard College as a Professor of Languages and Literature. Winning the 2007 Man Booker International Prize, from 2009 until his death he was Professor of African Studies at Brown University.

Achebe's work has been extensively analyzed, and a massive body of scholarly work discussing it has arisen. In addition to his seminal novels, Achebe's oeuvre includes numerous short stories, poetry, essays and children's books. His style relies heavily on the Igbo oral tradition, and combines straightforward narration with representations of folk stories, proverbs, and oratory. Among the many themes his works cover are politics, history, culture and colonialism as well as masculinity and femininity. His legacy is celebrated annually at the Chinua Achebe Literary Festival.