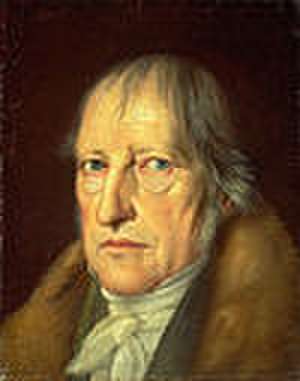 Georg Wilhelm Friedrich Hegel (; German: [ˈɡeːɔʁk ˈvɪlhɛlm ˈfʁiːdʁɪç ˈheːɡl̩]; August 27, 1770 – November 14, 1831) was a German philosopher and an important figure in German idealism. He achieved recognition in his day and—while primarily influential in the continental tradition of philosophy—has become increasingly influential in the analytic tradition as well.

Hegel's principal achievement was his development of a distinctive articulation of idealism, sometimes termed absolute idealism, in which the dualisms of, for instance, mind and nature and subject and object are overcome. His philosophy of spirit conceptually integrates psychology, the state, history, art, religion and philosophy. His master–slave dialectic has been influential, especially in 20th-century France. Of special importance is his concept of spirit (Geist, sometimes also translated as "mind") as the historical manifestation of the logical concept – and the "sublation" (Aufhebung, integration without elimination or reduction) – of seemingly contradictory or opposing factors: examples include the apparent opposition between necessity and freedom and between immanence and transcendence. Hegel has been seen in the twentieth century as the originator of the thesis, antithesis, synthesis triad, but as an explicit phrase it originated with Johann Gottlieb Fichte.

Hegel has influenced many thinkers and writers whose own positions vary widely. Karl Barth described Hegel as a "Protestant Aquinas" while Maurice Merleau-Ponty wrote that "all the great philosophical ideas of the past century—the philosophies of Marx and Nietzsche, phenomenology, German existentialism, and psychoanalysis—had their beginnings in Hegel."